A Caltech-led team of researchers that included a researcher from the Center for Astrophysics and Cosmology of the University of Nova Gorica Dr. Tanja Petrushevska, has observed the peculiar death of a massive star that exploded in a surprisingly faint and rapidly fading supernova. 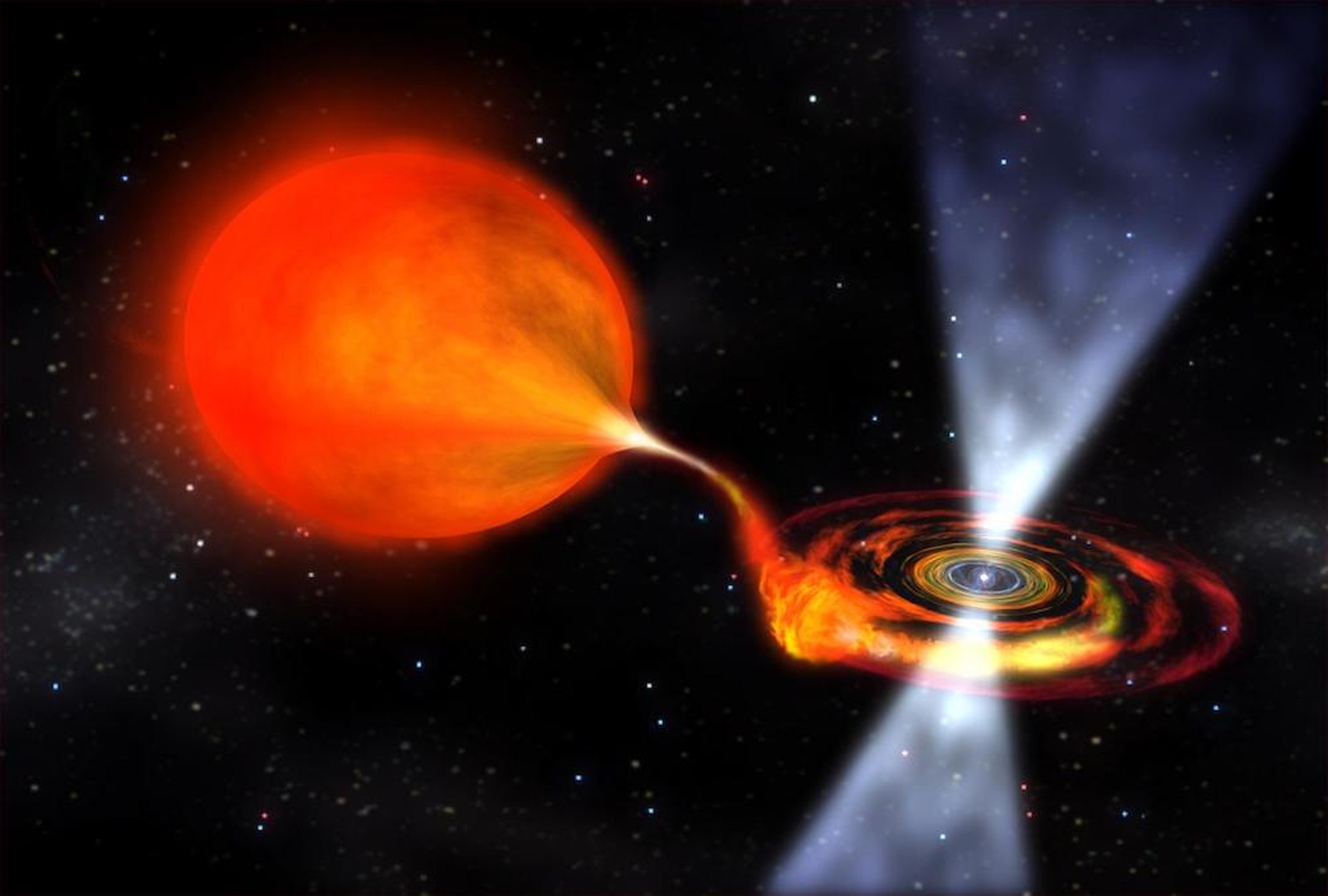 The star, which exploded as a supernova named iPTF 14gqr, seems to have a neutron star accompanying it, which had stolen material with its gravitational force. The illustration shows the flow of matter from a normal star to a neutron star. Source: NASA

These observations suggest that the star has an unseen companion, gravitationally siphoning away the star's mass to leave behind a stripped star that exploded in a quick supernova. The explosion is believed to have resulted in a dead neutron star orbiting around its dense and compact companion, suggesting that, for the first time, scientists have witnessed the birth of a compact neutron star binary system. The study was published in Science.

When a massive star—at least eight times the mass of the sun—runs out of fuel to burn in its core, the core collapses inwards upon itself and then rebounds outward in a powerful explosion called a supernova. After the explosion, all of the star's outer layers have been blasted away, leaving behind a dense neutron star—about the size of a small city but containing more mass than the sun. A teaspoon of a neutron star would weigh as much as a mountain.

During a supernova, the dying star blasts away all of the material in its outer layers. Usually, this is a few times the mass of the sun. However, the event that Petrushevska and her colleagues observed, dubbed iPTF 14gqr, ejected matter only one fifth of the mass of the sun. The fact that the star exploded at all implies that it must have previously been enveloped in lots of material, or its core would never have become heavy enough to collapse. But where, then, was the missing mass?

The researchers inferred that the mass must have been stolen—the star must have some kind of dense, compact companion, either a white dwarf, neutron star, or black hole—close enough to gravitationally siphon away its mass before it exploded. The neutron star that was left behind from the supernova must have then been born into orbit with that dense companion. Observing iPTF 14gqr was actually observing the birth of a compact neutron star binary. Because this new neutron star and its companion are so close together, they will eventually merge in a collision similar to the 2017 event that produced both gravitational waves and electromagnetic waves.

Not only is iPTF 14gqr a notable event, the fact that it was observed at all was fortuitous since these phenomena are both rare and short-lived. Indeed, it was only through the observations of the supernova's early phases that the researchers could deduce the explosion's origins as a massive star.

The event was first seen at Palomar Observatory as part of the intermediate Palomar Transient Factory (iPTF), a nightly survey of the sky to look for transient, or short-lived, cosmic events like supernovae. Because the iPTF survey keeps such a close eye on the sky, iPTF 14gqr was observed in the very first hours after it had exploded. As the earth rotated and the Palomar telescope moved out of range, astronomers around the world collaborated to monitor iPTF 14gqr, continuously observing its evolution with a number of telescopes that today form the GROWTH network of observatories.

Moving forward, the astrophysicists at the Center for Astrophysics and Cosmology at UNG are preparing for the Large Synoptic Survey Telescope (LSST). The LSST will be a ground-based survey with an impressive 8.4-meter telescope in Chile, aimed to continuously scan the sky in search for transient explosions. The LSST camera is the largest digital camera ever constructed; therefore they will be scanning the scanning the sky as never before. 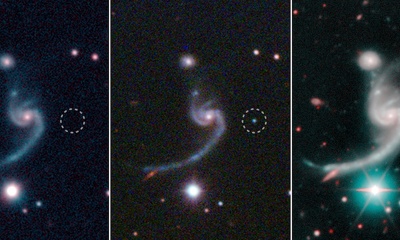 The images show spiral galaxy IV Zw 155 at 920 million light-years away. The circle on its periphery denotes the position of the supernova iPTF 14gqr: the left picture was taken before, the middle during the supernova explosion and the right after it has already faded. Source: Caltech / GROWTH - R. Hurt

The images show spiral galaxy IV Zw 155 at 920 million light-years away. The circle on its periphery denotes the position of the supernova iPTF 14gqr: the left picture was taken before, the middle during the supernova explosion and the right after it has already faded. Source: Caltech / GROWTH - R. Hurt