Recent measurement results favor conventional scenarios of the production of ultra-high energy (UHE, ≥ 10 EeV) cosmic rays (CRs) at astrophysical sites. Prominent jet outflows in powerful active galactic nuclei (AGN) provide suitable conditions for charged particle acceleration up to UHEs, and are thus considered prime contributors to the observed UHECR flux. During CR acceleration, hadronic interactions occur where photons and neutrinos are produced. As neutral messengers, they provide information about the CR source location in the sky, and the physical conditions at the CR production site, while the charged CRs suffer from loss of directional information by deflections in cosmic magnetic fields.

In a joint research performed with colleagues from University of Innsbruck (Austria) and international partners from Italy (Astronomical Observatory of Brera/INAF, University of Siena) and Poland (University of Lodz), we develop a dedicated method with the goal to determine to which extent UHECRs originate from jetted active galactic nuclei. To reach this goal, we employ a multi-messenger, multi-wavelength (MWL) approach including measurements of 1) UHECRs by the Pierre Auger Observatory, 2) gamma-rays of high- (HE, ≥ 100 MeV), by the LAT detector onboard Fermi Gamma-ray Space Telescope, and very-high energy (VHE, ≥ 30 GeV), by ground-based detectors, and 3) VHE neutrinos by the IceCube experiment. 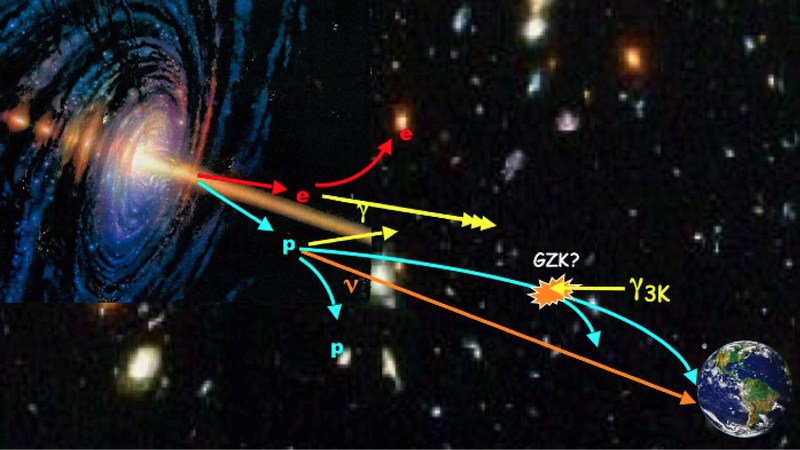 In the multistep procedure we employ, all nearby (< 200 Mpc) AGN are first classified according to their capability to accelerate particles to UHEs. For this purpose, we use MWL measurements of the AGN electromagnetic spectra, complemented with AGN emission models to build a list of suitable AGN candidates for UHECR acceleration. At this research step, we have demonstrated that the recently discovered, relatively low-luminosity, but numerous Fanaroff-Riley radiogalaxies (FR0) are good candidates for contributing to the cosmic-ray flux up to the highest energies.

Pierre Auger Observatory data indicate that the CR flux composition at extreme energies trends from light towards intermediate mass nuclei. Therefore current state-of-the-art AGN emission models are being extended by the Austrian research team to include injection, transport and radiative losses of particle distributions of heavy nuclei composition. The Slovenian research team develops and performs subsequent simulations of UHECR propagation from sources to Earth for various cosmic magnetic field configurations, based on the AGN candidate list. The resulting UHECR energy spectrum, mass composition, and arrival direction patterns expected at Earth are cross-correlated with the measurements done by the Pierre Auger Observatory and the Telescope Array. The signatures of the produced photon and neutrino emission are analyzed and their relation to Fermi-LAT and IceCube data is investigated as well. Finally, characteristic UHECR features stemming from AGN jets, and verifiable by the near-future Cherenkov Telescope Array (CTA), will be predicted.