Exploring culture, literature and society through the lens of modern and digital media.

The Research Center for the Humanities brings together scholars from a range of arts and humanities disciplines in the shared study of a region that has traditionally served as a dividing line between several historically distinct but geographically overlapping entities, namely, East Central Europe and Southeast Europe, the Eastern bloc, Yugoslavia, Trieste and the Trieste region, the Austro-Hungarian monarchy and the Ottoman empire.

The research areas across which the Center has representation include literary studies, digital humanities, gender studies, migration, minority and border studies, and media art history. 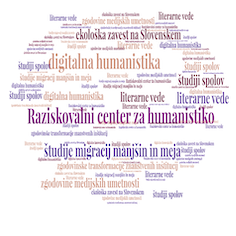