Variety of astrophysical observations suggests that about 85% of the matter in the universe is made up of hypothetical form of matter called Dark Matter. For example, observations of velocities of stars inside of galaxies, suggest that Galaxies are 'heavier’ than what we would estimate, based only of the stars and gas that we know that galaxies have. This, and many other complementary observations, lead scientists to deduce that dark matter is ubiquitous in the universe and to have had a strong influence on its structure and evolution. Image on the left shows the dark matter filaments, which we believe make up the mass in our Universe. The centers of the intersections of filament are home to 'visible’ mass, galaxies and galaxy clusters we see. 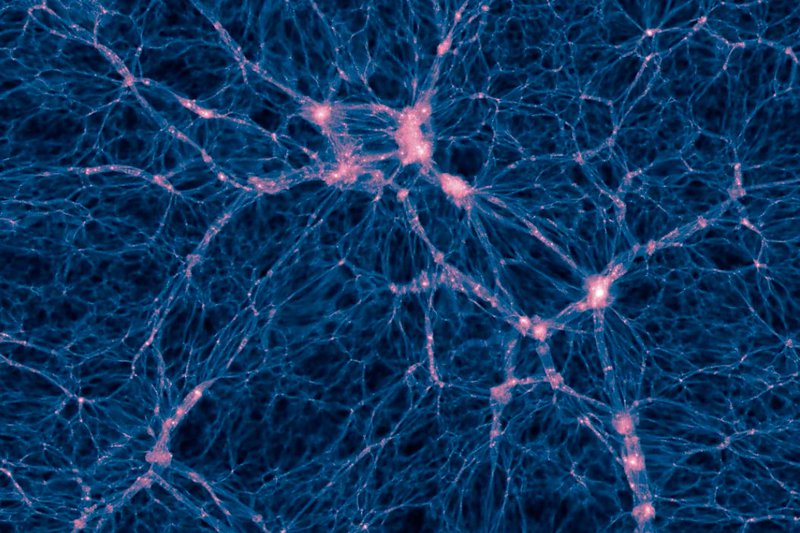 Dark matter is called dark because it does not appear to interact with observable electromagnetic radiation, such as light, and is thus invisible to the entire electromagnetic spectrum, making it extremely difficult to detect using usual astronomical equipment. However, if dark matter particles interact even very weakly with the usual particles, their signals could still be observed. For example, in regions of high dark matter density (e.g., the centre of our galaxy) pairs of dark matter particles could annihilate to produce gamma rays, which are extremely energetic photons, with energies close to the 100 times of a mass of a proton.

Members of the CAC (Dr. G. Zaharijas and student C. Eckner) are part of two gamma-ray experiments, Fermi LAT and CTA. By analysing the astrophysical data they search for signals of dark matter, and have so far helped set constrains on particle physics models of the nature of dark matter particle and its interactions with the known particles.