Emerging and re-emerging viral infectious diseases pose a serious threat to global healthcare. Hence, a thorough understanding of the host antiviral response and its cellular mechanisms is crucial. Vault ribonucleoprotein organelles are large and highly conserved macromolecular complexes, which have been recently associated with the immunological response to infection of several human viruses. Vaults are nano-compartments connected to multiple cellular pathways: nucleocytoplasmic transport, multidrug resistance, apoptosis and innate immunity. To date, however, their exact role in the cellular milieu remains unclear. Within this project we intend to study the function of vault particles with bipartite research that will cover i) the investigation of vault’s cellular role, regulation and network of interaction with other cellular components in the context of viral infection; ii) in addition to a comprehensive structural and biophysical investigation of the ribonucleoprotein particle.
Ultimately, we believe the proposed research project will bring about a better understanding of this protein complex, especially in connection to viral infection and the host immune system, providing new answers and directions to the scientific community involved in the fields of virology, antiviral applications and protein compartments. 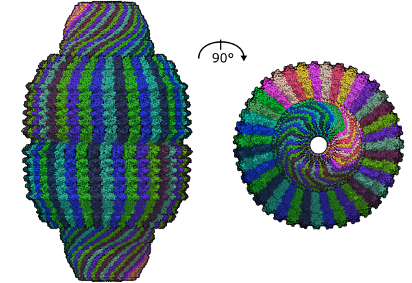 Structure of the vault complex. Multiple copies of MVP from Ratticus norvegicus at 3.5 angstrom resolution (PBD 4V60) form the vault particle. The two halves of the barrel-shaped protein compartment are composed of 39 MVP subunits each.